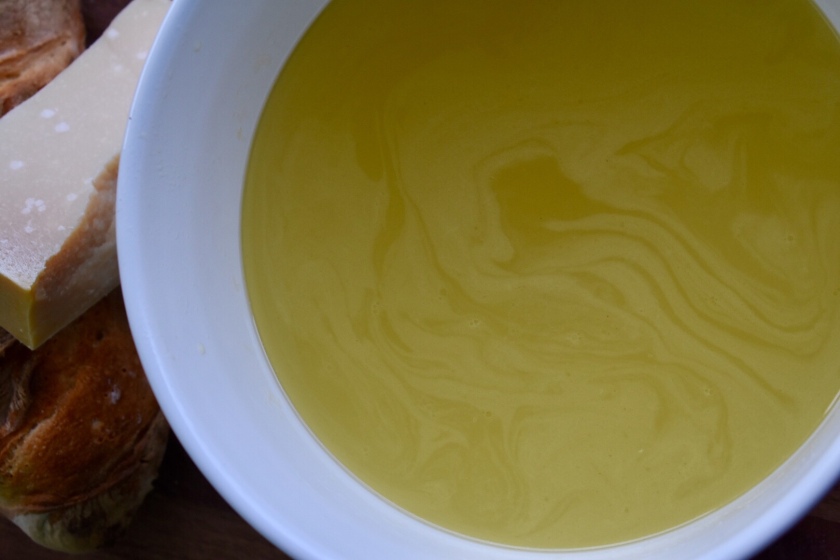 Some people know the secret of adding a leftover parm rind to a pot of soup for subtle depth in flavor, but did you know you can make a delicious broth using just the rinds themselves? Perfect for an elegant and unexpected risotto, a warming bean soup, or tortellini en brodo, this is the cozy winter broth I never knew I needed.

First of all, I’d like to say that I’ve had this draft sitting since November. My initial idea was to share this for Thanksgiving, but that holiday just came and went, didn’t it. So then I told myself “OK Christmas then!” followed by “Still works for New Years!” and now it’s the literally the last day of January.

The thing is though, it does still work—for any holiday or the insignificant days in between them. Because there is never an inappropriate time for Parmigiano. And also, because when you cook dinner for your family on both Thanksgiving and Christmas Eve, as well as for a holiday dinner party you scheduled for the same week, you learn that not everything goes according to your perfect plan. And that you should always drink while entertaining.

Now back to the recipe.

I always have a block of Parmigiano Reggiano in my fridge. This is one staple ingredient that I hardly ever run out of, and I rely on it often. A recent midnight after-work snack-turned-full-on-pasta comes to mind. But that also means I end up with a lot of rinds over time. I store all of my rinds in the freezer, and I just grab one and toss it in when making soups like Pasta e Fagioli.

But recently, I found myself with quite the collection. I thought of making a soup of some sort, but then I had a thought. Also, I was admittedly a bit lazy and didn’t have a lot of ingredients on hand—or so I thought—but I needed to figure out something for dinner. Can I make a soup out of the rinds?

“Is that a thing?” I humbly asked myself. Not out loud or anything…

And then, like most of us do when confronted with a random question in life, I Googled it. 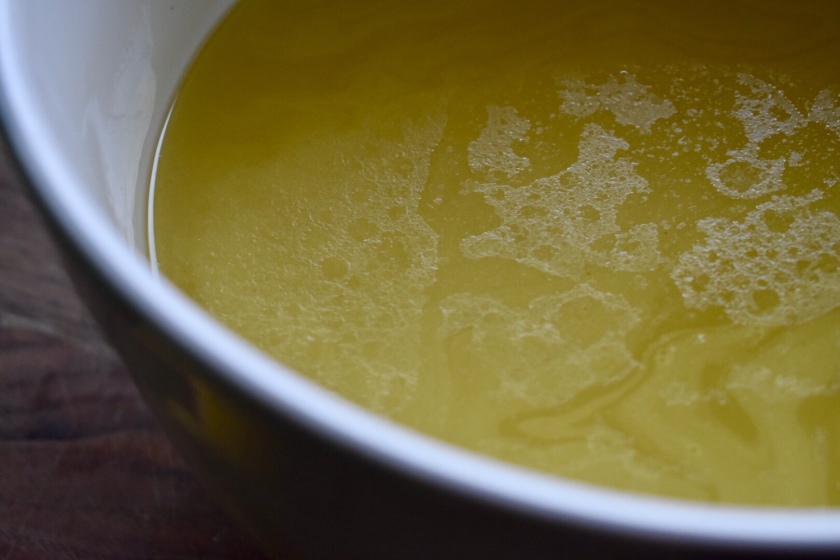 Oh, it is very much a thing. An easy, delicious, brilliant thing. The genius simplicity of this broth consists of throwing a bunch of rinds in a pot with herbs, along with an onion and some garlic and water. THAT’S IT. AND YES, IT WARRANTS ALL CAPS.

Some of the recipes I read called for frying garlic first or other extra steps, but by the third time I made it, I just threw everything in the pot, brought it to a boil before lowering the heat to a simmer, and let it go for about two hours or so. The result? A simple, cozy soup that is utterly delicious all on its own, but can also be used to anchor other ingredients.

You could use this in place of your typical broth for a seriously elegant risotto, or you could use this as a base for a soup. After straining the broth, there are a few ways you can go. I like to heat up some extra virgin olive oil in a pot, add some white beans and escarole, and add the parm broth. You can also just add some tortellini or your favorite pasta to the hot broth and call it day.

You can also freeze it… if you don’t eat it all immediately after you make it.

Every time I strain the soup into a massive bowl, before either using it up or storing it in jars, I literally cannot stop myself from sipping it straight from the large, heavy, definitely-a-mixing bowl. It is pretty ridiculous and probably a hazard.

But this is the most luxurious broth I’ve ever tasted. That’s right! I said it! I have no control when it comes to this sorcery of soup.

This broth inspired me so much, that I found myself feeling much more confident about working with just water. Just a few weeks ago, I created a lazy pantry soup out of nothing more than white beans, herbs, water and two parm rinds. I topped it with fresh lemon and a swirl of pesto. It was absolutely delicious and hard to believe I made it without any broth.

After that, I took it one step further and challenged myself to make pasta e fagioli with absolutely no broth—relying on just two parm rinds in cheesecloth and my remaining ingredients to deliver the best possible version of the dish. It worked. I could taste all the layers of flavor that were previously subdued under the cloak of chicken broth. See note on chicken broth below.

I do want to note that I am referring to using water instead of the boxed chicken broth you find in the store. If you are using homemade chicken broth, that is a very different story. I typically make some after roasting a chicken and store it in mason jars, but as much as I’d love to be home all day cooking, the fact is I work 40 hours a week and I just don’t always have it. If you have homemade delicious broth, you should definitely use that!

With the proper seasoning, patience, and attention to quality ingredients, it’s amazing what you can stretch into a delicious meal. For a split second, it’s in these moments that I feel a connection to the past. The days before the convenience of grocery stores, seasonless produce, and Amazon. I’ve always felt that I was (on most days) one of those people who could whip up something with seemingly nothing on hand, but this makes me feel unconquerable in the kitchen.

Like my deep appreciation/borderline obsession for pasta water (post on that coming soon!) this broth changed what I see when looking at an “empty pantry.” Have a parm rind? You can work with that. 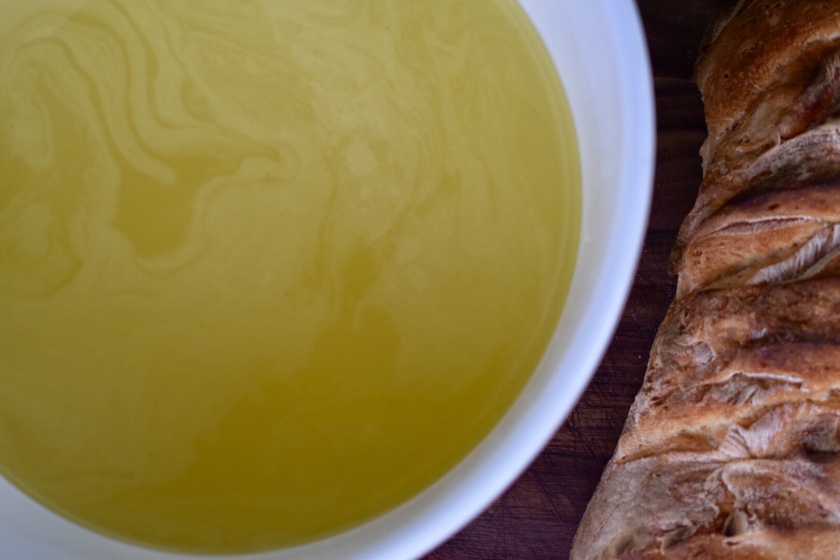 *If you happen to not be a Parmigiano Psycho like me, you can sometimes find just the rinds at local farmer’s markets that sell specialty cheeses, or places like Whole Foods/higher-end grocery chains that carry the real stuff. Don’t be afraid to ask the person behind the counter! You can also cut the rinds off before you’ve finished the cheese.

**a note on using cheesecloths. I was going to make this optional but it’s really not. Unless you have a thing for surprisingly severe and nearly impossible to remove cheese stuck at the bottom of your beloved cast iron pot 🙂 🙂 Happy Parmigiano Brothing!

My name is Adina. I’m a (mostly) self-taught chef with a deep love for pasta and a firm belief that there should always be bread at the table. Welcome to my blog!
Join 91 other followers

Simple Italian-inspired recipes and the stories behind them.
Join 91 other followers